Those who have been reading here for a while know that while I lived up in the flat North of Germany, I was an avid bike commuter. Even before that, when I was living in the slightly flatter parts of Southern Germany, I was also an avid train/bike commuter (read: I biked from the train station to my office). Now, I live in a part of Southern Germany that has HILLS. Proof:

While this view from my balcony will almost certainly never get old, I obtain it by living at the top of one of those steep hills, which, as I have mentioned, already seriously humiliated me once.

But I refuse to give up, so today I commuted to the office. It was very smooth in the morning and I’ve never gotten to the office this fast. Of course it was also all downhill, so I just wore my normal office clothes as I knew I wouldn’t break a sweat. The way up, however… required some planning ahead. I took some sports clothes with me and changed in the bathroom before leaving the office.

(I actually did wear shoes while biking)

I also actually paid attention this time and took the designated bike route on the way up. It’s marked quite well with clearly visible signs and it seems like someone actually put thought into finding the least steep way up my home mountain. There was still some serious climbing to be done at the start, but then it levelled out and was fine.

So I’m pleased to report that this worked out well! I worked up a nice sweat and felt really accomplished afterwards. Weather and appointments permitting, I plan to do this about twice per week now, on days when I’m not swimming or doing other exercise after work (kayaking season starts this Friday for me! Yay!).

Bringing Biking Back: a success story so far!

This beautiful little animated video tells the story of a woman whose relationship with another woman and cycling transforms her vision of the city she’s living in: Manila.

I came across the video through Meli of Bikes and the City and her awesome Pinterest feed.

Have I mentioned that there are a lot of hills, nay, mountains in my new home town? And that I live on top of one? Which is fantastic when considering the view out of my living room window (below), but not so much when it comes to cycling.

The benefits of living on a hill

I knew getting into town would be easy because it’s all downhill. I also had a feeling it would be much harder getting back home to my humble abode up Mount Doom. But isn’t one a power woman and stubborn to boot? There was no way I was admitting defeat without even having tried to cycle into town and back. So last week, I decided to test the waters while I was still on holiday. No work clothes, just a denim skirt, sweater, scarf, and jacket. Fabulous weather. Lots of time. I wanted to check out the local farmers’ market and run some other errands, so off I set. “Ha!”, I thought smugly as I zoomed downwards, “this isn’t even that steep! I’m gonna be fine!” It turned out I had quite a lot of shopping to do, involving heavy items such as juice, milk, wine, and potatoes, plus a few other things. This was my load, consisting of two shopping bags, my trusty cycling handbag, and a pack of, ehem, loo roll (don’t be confused by the mirror making it look like I had two of everything!).

What can I say? I got humiliated by my home mountain. I got… not even half way up before I had to get off and start pushing my bike. I got back on towards the end when things flattened out a bit, but I arrived home with the colour of my face matching the beets I’d just bought, sweating and panting like I’d finished a marathon. I’m a wuss, an #everydayonabike failure, because what I will most likely not be in this city is, well, every day on a bike. In Hamburg, which is flat as a tortilla, this kind of bike shopping wouldn’t even have been worth mentioning. I’ve been living in potential bike paradise, and I never appreciated it sufficiently. I salute all of you who regularly bike in mountainous cities. How do you do it?

Because I’m not about to lock my bike away and never look at it again. No way! I’ll find ways to make it work, so I appreciate any tips you guys might have. One option is to cycle in wearing my work clothes and then change into something more sporty before going back, and not do it every day. What do you think?

I bought the Bern Muse helmet because it’s getting cold out.* The previous years, once the temperature dropped below a certain level, I stopped wearing a helmet and switched to a wooly hat instead to prevent my ears from freezing off on my commute. The helmet I wear during the non-freezing seasons is a Giro Skyla, so I suppose in theory you could fit a hat under it if the hat was very snug – and this is where we run into problems: hat hair! I can’t shower once I get into work so the hair I arrive with is the hair I have to carry on around all day. 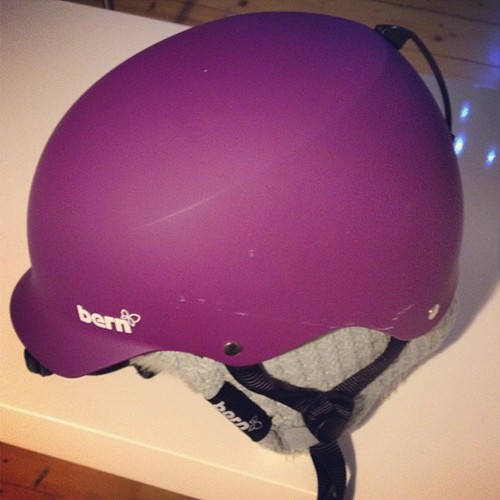 This year, having discovered the existence of winter helmets, I decided to give it a shot. Bern defines this one as a snow helmet rather than a bike helmet, but I’m not entirely sure where the differences lie (maybe due to the fact that I neither ski nor snowboard), and it was marketed to me as a “BMX” helmet – and it’s been doing the trick for me. The reason I didn’t buy the Berkeley – my second option – was that (a) it was more expensive and Muse helmets aren’t exactly cheap to start with, and (b) I wasn’t entirely convinced by the Berkeley’s fabric visor. It seemed to me that this add-on that might get dirty quite quickly and then it won’t look as dashing anymore.

END_OF_DOCUMENT_TOKEN_TO_BE_REPLACED

There’s a saying in German, “good things take time”. As for me, I purchased my Basil Katharina shoulder bag months ago, just after I’d looked at it in Amsterdam.* I’d been coveting it for a while, but there was one thing I wasn’t sure about: I carry a bike basket on BB that’s firmly attached and I wasn’t sure whether I would be able to attach a bike bag as well. So I wanted to take a look at it first to see whether I could actually attach it to the bike basket itself rather than to the rear rack. The good news is: this is perfectly possible, and so I went for it. 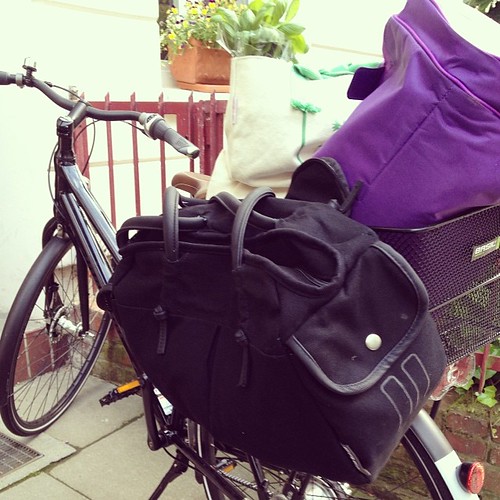 I’ve since been using the bag almost every day for commuting to work. This was one of the reasons I started coveting it in the first place: the Katharina is elegant enough to be taken into the office and camouflages as a canvas handbag. It’s not overly formal, but formal enough, making it perfect for my purposes. To up the “smart” factor, I purchased it in black. There’s also a very cute version with flowers on it, and then there’s also the Basil Elements bag, which – as far as I can tell – is pretty much the same bag, but comes in a bluish-grey shade and brown. You can check them all out here.