This beautiful little animated video tells the story of a woman whose relationship with another woman and cycling transforms her vision of the city she’s living in: Manila.

I came across the video through Meli of Bikes and the City and her awesome Pinterest feed.

Last Friday, I went to the Critical Mass Ride in Hamburg for the first time. Critical Mass is a mass bike ride that takes place in many cities around the world. Even though Critical Mass doesn’t want to be seen as a “demonstration”, it has a goal: showing that cyclists don’t block traffic, we are traffic.

And so cyclists get together and take over the streets for a few hours, showing that we’re here.

I’d been wanting to go for ages, but since the Critical Mass ride takes place only once a month – every last Friday of the month – and I’m often on a train at precisely that time, this Friday was the first time I could make it. The weather behaved, it was warm, it was great.  If you haven’t tried it, riding a bike with over 1000 other cyclists and having the whole street to yourself is really something to give you the warm fuzzies. People brought music, some had decorated their bikes, some had dressed up. The crowd was mixed: from families to hipsters to the elderly, and in the midst of it all, yours truly still in her office outfit.

Here’s a video of my favourite part: riding through the Wallring tunnel just in front of the central station.

And here are some pictures. 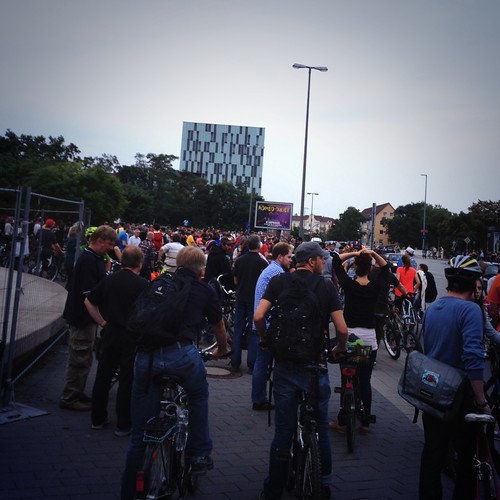 Getting ready at the meeting point 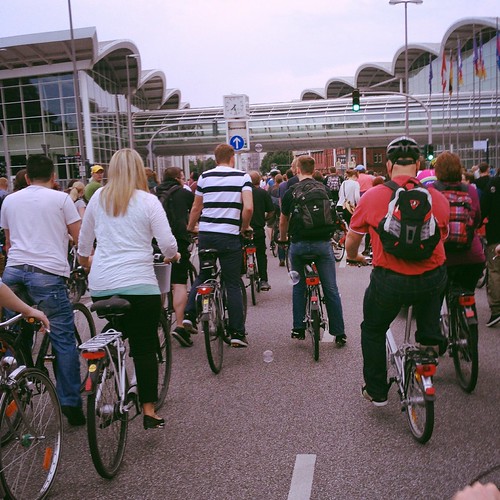 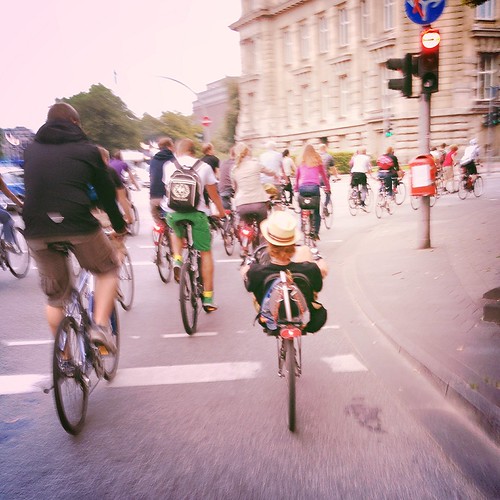 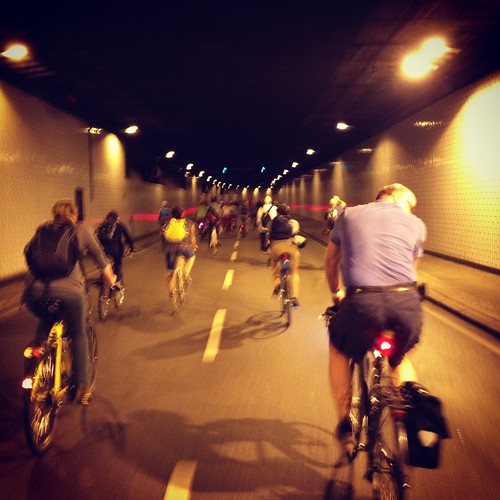 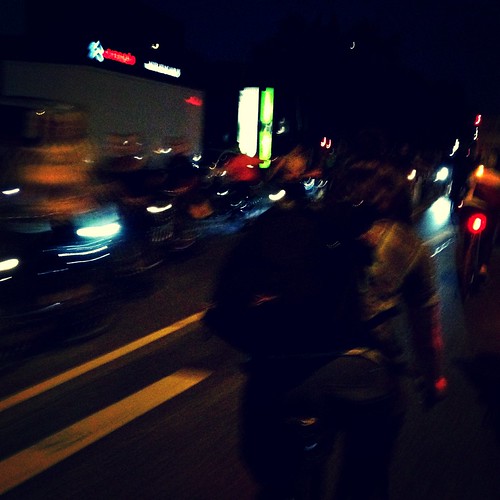 For more pictures and info on the Critical Mass ride in Hamburg, go here.

My week of holidays is proving to be excellent in terms of the weather. Summer is really playing along this year! The benefit of my current work situation is that I get to divide my time between two completely different but wonderful cities. Hamburg is big, metropolitan, and nordic, and Heidelberg is small, cute, and southern. Heidelberg also has beautiful surroundings that are really easy to reach by bike. On Tuesday, Mr Liburuak and I made use of this and went to Ladenburg, a small town a good 10km away, for dinner.

I keep an old bike that I initially bought for commuting between the train station and the office during my PhD. It cost 75 Euros, used to sleep outside at the station every night and is still indestructible. Here are our rides, guess why I call my trusty old street bike Froggy: 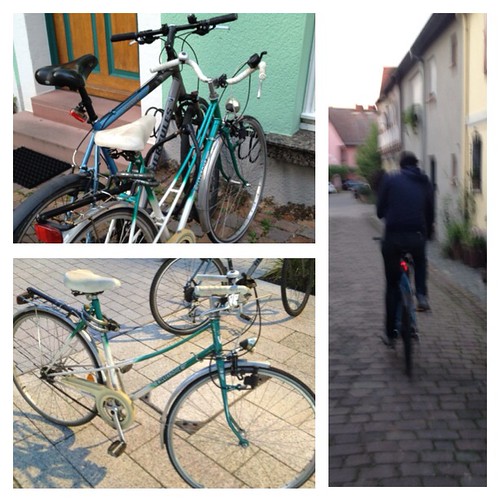 END_OF_DOCUMENT_TOKEN_TO_BE_REPLACED

I’ve now had my Diamant 247 for a few months, and I’ve noticed people have been led to my blog searching for it, so it’s time to do a little review. Another first: I’ll do a German version of this post. With Diamant being a German company, I figured this might be useful. I’m going to write mostly about my personal experience with BB, so if you want all the technical specifications, looky here (unfortunately these don’t seem to be available in English).

END_OF_DOCUMENT_TOKEN_TO_BE_REPLACED

Last weekend, Mr Liburuak and I went on a field trip to Amsterdam. Like in much of Europe, Thursday was a bank holiday for us and so we took Friday off and, also like much of Europe, we decided to pay the Dutch capital a visit. This post is going to be long, but I promise there’s something in it for everyone: biking, eating, and reading!

In true form, we rented bikes to join the hordes of tourists and locals scuttling around the city on two wheels:

We got our bikes from Discout Bike Rental at the recommendation of the nice chap at Recycled Bicycles who didn’t have any left. We’d loved the idea of Recycled Bicycles – doing up old abandoned bikes for rental – but he only has a few bikes to rent out, so we should probably have called ahead to book. At Discount Bike Rental, the bikes aren’t the newest, but they were perfectly fine for us and at least you don’t stick out like a sore thumb as you would with wheels from one of the super touristy bike joints that populate the city.

With Amsterdam being a sort of bike mecca, I’d like to say a few words on cycling there. I think there are some reasons that have been conducive to Amsterdam becoming the two-wheeled city that it is: the centre is very compact, extremely flat, and a lot of the streets are so narrow that driving around them in a car is actually quite a nuisance. But of course, the city has done its share to facilitate biking: almost all one-way streets go two ways for cyclists. Cycle lanes are plentiful and wide. There are parking spaces for bikes everywhere. Of course, the fact that Amsterdam drivers are so used to being surrounded by cyclists makes being surrounded by cars much less threatening for cyclists than elsewhere. People just know what to do, whereas elsewhere, drivers sometimes just seem to get really confused by folks on two wheels and take bad decisions as a result.

But in some ways, cycling in Amsterdam is not that different from cycling in other cities around Europe, to be honest. Many cyclists treat traffic rules with a surprising amount of disregard: random crossing, no lights at night, and no signalling when turning are the order of the day. I have to say this did some damage to one of my bike activist tenets, which is kind of hard to give up. In my experience, bad road regulation is often responsible for practically “forcing” cyclists to break the rules (such as traffic light intervals that are too short for cyclists to catch a green wave, for example). Apparently though, people will still break the traffic code in masses, even if their needs are taken into account much better than elsewhere. I’d like to point out that Amsterdam drivers don’t break the rules more than drivers in other places, showing that more room and regard for cyclists doesn’t result in cars braking the rules more frequently because they’re inconvenienced by bikes. This discovery was a bit of a disappointment, I have to say. Maybe cyclists in Amsterdam feel safer in disobedience than elsewhere because drivers are more used to them? Mind you, I’m not saying that you should blindly stick to rules that aren’t useful, but it seems to me that there’s something to be said for having functioning lights at night and bearing in mind that you’re sharing the road with others (cars, bikes, motorcycles, whatever).

Understandably, some locals must be ever so slightly fed up with wobbly tourists who clearly haven’t been on a bike in decades clogging their ample bike lanes. Amsterdam cyclists are fast (and some of them are also positively furious at people who are slower than them), so if you’re not careful they just might run you over. We were fine with this, but then again we’re both experienced at navigating cities and traffic by bike. But if you’re not and decide to explore the city on two wheels, it can probably be quite tricky.

The weather gods were kind to us for the first two days and provided us with plenty of sunshine. We had a great time pedalling around the city and lounging in Vondelpark.

On Thursday night, we went for a wonderful dinner at Bussia, where we treated ourselves to a delicious Italian-style meal in a relaxed atmosphere:

On Friday, we spent time exploring the Albert Cuyp Market, an awesomely eclectic collection of food, clothes, bike accessories and anything you could think of. It’s definitely worth a visit, and the area where it’s located (De Pijp) is full of cosy cafés and tiny shops. We lunched on delicious burgers at The Butcher – a tiny burger joint easy to miss if you’re walking along the stalls, because it’s nestled in between two of them on the side of the street. In terms of the meat, these were probably among the best burgers I’ve had. On Friday night, we went for a Chinese Fondue at The Sea Palace, a huge floating restaurant just by the public library (on which more below). It’s just as tacky as most Chinese restaurants in this part of the world, but the fondue was very good. It tasted just like the one we’d had in Taiwan, and we spent the evening reminiscing about that fantastic holiday we took a year ago!

And because we can’t go anywhere without there being books, we also geeked out at the local public library.

The way I know most public libraries is as slightly run-down, often sort of dark places with books in them, which despite everything is already exciting enough. So when we went to the one in Amsterdam, we were gobsmacked at this super-modern, bright, enormous multi-media space where people from all walks of life were reading, watching films, using the internet, studying and even playing the piano. Because yes, there’s a piano you’re encouraged to play in the entrance hall. The only condition for playing is that you should know more or less what you’re doing (the girl that was playing when we came in sure did).

We were so impressed with the city’s effort to create a space where reading, music, and media are at the disposal of anyone who feels like walking in. A lot of young people with immigrant backgrounds were using the desks to do their homework, and I think providing this space is a great way of connecting people from more marginalised parts of society with literature and culture, just by being available and being free. Other cities could really, really learn something here. The library actually impressed me a lot more than the bike friendliness Amsterdam is so renowned for.

By Saturday, rain had caught up with us, and so we returned our bikes and went exploring on foot (it’s one thing to get a bit wet when cycling on your way to the office or home, but another when you know you’ll be spending the rest of the day outside and walking around). In the evening, we went to see Night Train to Lisbon at De Uitkijk, a lovely old cinema. Do book tickets and get there ahead of time though. The place is tiny and seats aren’t numbered, so you have to get there early to get good seats.

We loved Amsterdam. It’s amazingly vibrant, diverse, and beautiful to boot. There seems to be an infinite amount of stuff to do. We’ll be back soon for sure!